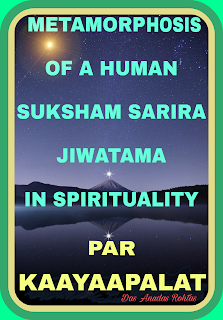 In fact, Spiritually there is great meaning's and Value of Metamorphosis, Per - Kaya Palat or you can say Per-Kaya-Pervaesh in Hinduism. In Pasture Era, Our great Rishi, Muni, Monks have the great importance in their Yogic & Spiritual life. They practiced great Yoga Aasan kriya, Pranayam and highest and deepest meditation in their spiritual life. Among of them Yogic kriya the Metamorphosis is one and Rare. Its easy by Sav-Aasan-Yoga-Kiriya with Karan-Sarira. Spiritually there is great divine secrecy of God in this great divine yogic- kriya" Metamorphosis " and a God gifted Bliss in the life of a yogi purush and true devotee of God.

If you do not give such a compliment, it is good, but you have heard it. In this, the work of a supreme Brahim yogi is overturned by the entire divine team, with the help of all the divine characters in this work is accomplished with the help of this service. Like this yoga kriya in Bhagti Marg, it is a very difficult and dangerous way for human. In this way, If it is deemed appropriate, then the work may be overturned in a given time, for a particular reason, it would be like this, it is similar to a by-pass surgery, spiritually and divinely, The Metamorphosis of a Suksham Sarira. It may be God knows. We have heard from the pasture Rishi, Muni, Saints, His meditation & realzation to just. Ram things, know Ram. Through This divine yoga kriya Tatav can success to reached His destination in a moment and can take place with the help of his divine cell, Karan-Sarira " Tatav " of any other creature's free divine body Suksham Sarira it may be Miner or Biggest, because, Tatav, Soul-Cell are equal same in sige divinely in every kind of creature's body and can reached any where and realized the position of that spot in the Shristi and disappeared very strangely in the moment during meditation * "Being Conciousness and Stability of Mind only after blessing by God" * . But per-kaya-pervesh yoga Kriya is easy by with kaaran Sarira as holy soul to holy soul and "Tatav to Tatav"  for a True Devotee of God, Yogi Purush and Avatari Purush, after blessing by God only.

Mahatman, it is the subject of a reversal, here a divine realization in meditation His life but we must first understand the transcendence. *** It is not the divine yoga action of karan Sarira, Divine TATAV TO TATAV, and  which is also not the divine yogic action of the human physical body, it will be transitory, It will be easy, but the Kaya-Palat Yoga Kriya, Metamorphosis, is the Transcendence of a Jiwatama, it is very Rare Divine yog Kriya, which happens after the Yug-Yugantra.*** NOW YOU WILL GET NEWNESS IN LIFE. It is as a "NEW RE-BIRTH" It can be very difficult and painful to prove a person, yet the grace of the Master remains all right. It is matter of self realization only living in ansethesia, during meditation.
Jai Shri Krishna.

" The State of Bhagti in the highest order is called a complete devotional State to GOD."