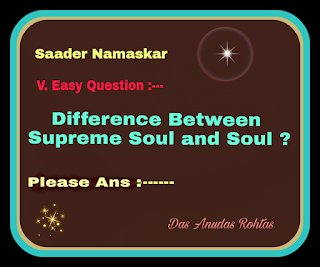 Ans:------
Generally there is a great misunderstanding about the characteristics of the individual soul and Supersoul, or jiva-atma and param-atma.

Some transcendentalists claim that the soul and Supersoul are absolutely one and the same whereas others claim them to be different.

The truth, however, is that the individual soul and Supersoul are two different entities which are similar in their spiritual natures but distinct in their quantitative function.

Jiva-atma, or the individual soul, refers to the living entity which is embodied in a physical form, produced by material nature.

Param-atma refers to the Supreme Lord who expands Himself as the Supersoul and who enters into the hearts of all living entities as well as all the atoms. Thus param-atma is the localized aspect of the supreme, situated in everyone's heart as the transcendental witness.

This is also confirmed in Bhagavad-Gita [15.15] where Lord Krishna says "I am seated in everyone's heart as the all pervading Supersoul and from Me comes remembrance, knowledge and forgetfulness."

However, according to the Vedanta-philosophy there is a difference between the Supersoul and the individual soul, and this is explained in Bhagavad-Gita, where the Lord says that although He is situated with the living entity in the same body, He is superior due to His transcendental situation. He is directing the living entity by giving knowledge and intelligence from within.

Mayavadi philosophers, or impersonalists, mistake the living entity for the param-atma, who in actuality is sitting side by side with the living entity. The Supersoul acts as the neutral observer, witness, adviser, guide and friend of the individual soul. Because the param-atma, the localised aspect of the Supreme Personality of Godhead, and the individual living entity are both within the body, a misunderstanding sometimes takes place that there is no difference between the two. But there is a definite difference between the individual soul and the Supersoul, and this is also explained in the Mundaka-Upanisad by the following example.

The individual soul and Supersoul are compared to two birds which reside in the same tree. One of them (jiva-atma) is eating the fruits of the tree, while the other (param-atma) is just witnessing the activities of his friend. The witness is the Lord, and the fruit-eater is the living entity. The fruit-eater (living entity) which is overcome by the reaction of his enjoyment, has forgotten his real identity and is overwhelmed in the fruitive activities of the material conditions, but the Lord (param-atma), who is always transcendentally situated, is not affected by the material atmosphere. That is the difference between the Supersoul and the conditioned soul. One should not think that the Supreme Lord becomes conditioned when He incarnates on earth or expands Himself as the Supersoul.
682 Views · 6 Upvotes

There is great Difference between Supreme Soul, Supreme Lord's soul and Indivisual Soul. We also explained here self divine realization about these divine Souls, Supreme lord soul and individual souls situated in the all created shristie's hearts. Supreme soul is superior and located on its own Horizon And Stabled. Because after Maha- Parlaye When it is the time of creation of the Shristi first of all there happened a great black-hole in the dead Universe, there appeared automatically and very dangerable a great hole suddenly and happened a great blast and  appeared strangely a sharp divine light and it stable in the Universe at the upper place Like a Divine-Dot as a Superior Supreme Soul, Supreme Tatav, sighning like a Diamond and at the same time there appeared a divine ring as a Security covach a spacial divine Power Adhi-Sthan, of this Super- soul also. Both powers are automatically, systematically and completely divinely situated and stable on a place and located on their Horizons forever. It is a Super Holly Soul. Our pastur Rishi, Muni and Monks gave name as Paar-Braham, away from Barhama's Loka to Super- Soul, means away from all Shristies, from the supreme Lord's soul and all individual souls. When God wants to create Shristiy then God created Himself first of all , * HIS- PARA-ROOP * The Formated God, ( Supreme Lord's Soul ), GIVING ALL RIGHTS OF DIVINE POWERS, similerly to Him, and some indivisual Souls also in this beautiful Shristy and some physical elements in Shristi  also. All these help in creation this beautiful World. Here we should remember that Adhi- Sthan, Ring a spacial divine power is not with individual souls, yet individual soul have ability to obtain this divine power being a true Devotee of God. This divine power can be kindly obtained by JIGYASU with the help Viveka- Power, only blessing by God .

Supreme Soul is attechmentless, a pure Holly Soul in the Shristi and situated lonely in the Satya-khand Loka, located on His Horizone where there no one can reached. Only  The Formated God's Soul or you can say Supreme Lord's Soul and individual souls helped in creation the Shristi, according to Lord Shree Krishna in Dwaper-Yuge that He lives into hearts of all bodies binded with Divinity, automaticaly, divinely and systematicully and also owner of the whole suksham Shristi's, in the outer physical world, in outer Shristies and inner divine World's shristies, all creations are created by Supreme lord. No doubt, He has entity power, a spacial kind of divine power and can placed Himself in other's Shristi, who can entrence into one to others bodies, in other shristies. Supreme lord living in His Shristi can live together in all individuals shristies in same time. Supreme lord live in the shristi forever till Mahaparlaya. In this way individual common great men's soul only have knowledge about the Formated God's soul and  all these individual Souls. Infact Superior Supreme God is unreachable matter, out of human knowledge. It is the matter of self realization only after blessing by The Almighty God, GOD. Avtari Purush Rohtas explained here with the help of His divine knowledge through personal divine realization which god bless him for the welfaire of the humen-beings in this world, in this beautiful Shristi, in this Yuge-Kal-Yuge.

So there is one ORIGINAL Superior Supreme Soul, Holly Soul, Secondly, The Formated Supreme Soul, as Supreme Lord's Soul, and Thirdly there are unlimited individual Souls in all Shristies in this Beautiful Shristi

Like this creation of the Shristi's cycle-event action thus Automatically, Systematiculy Divinely and continuously to run like past that after millions of years of work like this. It Suddenly and strangely created incidence of action and Destruction of this beautiful Shristi event after millions of the years currently, in present and future period, in the presence of Superior Supreme Soul GOD in this wonderful Universe in this beautiful Shristi.

That is why, all the true devotees of Supreme State God, should most praised begged that and  diligently Seek and refuge in Him, The Super- Soul- God ," NARAYANA " from Whom has emanated this beginningless flow of Creation, and meditate on Him. 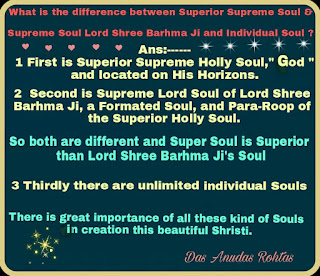