Observation Divine Black Christle
------------------------
We observe the reflection of Divine Black Dot on the wall of the Bathroom on 2-end Flower of show-room many time, in these two minutes, Reflecting from "Bhirkuti" (a Divine center place of my Forehead), a Divine Black Dot Like a small peace of Black Diamond which we show with the help of  Image giving below. Size of divine Dot, very small as a ( half centimeter only ). Supreme divine power explained like a white brillient Diamond Which is today going to explained ls like a Black brillient Diamond " FIRST TIME " in this wonderful World. It is very strange now. But we believe upon it. Because we observe (SHAKSHATKAR) with my open eyes, that God, Tatav Pronunciation (Dharan-karna) the Form of Black Christle, during Urinate, in standing position at 1-30 pm on 18-10-2016 on the roof of the showroom. Now it is realised like a black " CHRISYLE ". " IT MAY BE THE APPEARENCE OF LORD KALKI IN HIS ORIGINAL DIVINE BLACK- FORM, 'NIRAKARA', LIKE A BRILLIENT BLACK DIAMOND "
Attention Please :-
It seems that The Almighty God convert Himself from white divine Supreme Tatav to  Black Divine Supreme Tatav, or we can say,Now, God assumption the form of a black Christle. 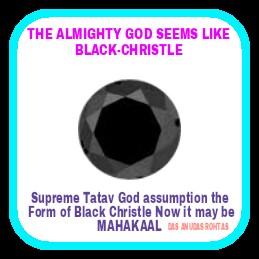 Posted by Avtari Purush Rohtas at 2:16 AM